skip to main | skip to sidebar

Demonic hosts Shady Shayla and Creepy Cindy will call forth the spirits of MINNEAPOLIS, joined by a cast of witchy misfits flipping the mix on tales from the Night Shade crypt: Watch in horror as a giant anunnaki pig has his fill of a pig themed Portlandia restaurant! Freeze in terror as the spirits of an ancient blood ritual between men and wolves is projected from a ceremonial grimoire! Claw the edge of your seat as a young boy tries to save his father's soul; and almost loses his own! Gasp as ghosts fly from an ancient manuscript and sit with YOU in the audience!

OCTOBER 21-31, 2021
Bring your lawn chair,
your coziest flannel shirt,
and a companion to clutch! 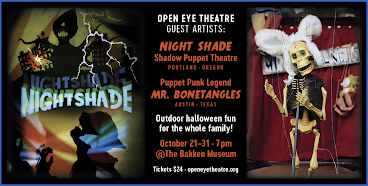 Night Shade
NIGHT SHADE opened for Brooklyn-based party band Golden Triangle; opened for post punk band Japanther; lit up Liberty Hall in North Portland; the Voice4Vision Puppetry Festival at Theater for the New City in NYC; and Live With Animals Art Space in Brooklyn, NY; and performed at the 2007 Puppeteers of America National Puppetry Festival. NIGHT SHADE, along with composer Blake Madden, was awarded a 2008 Jim Henson Foundation Seed Grant for the creation of a new show "Tigie". nightshadedynasty@gmail.com